“Nawara lives in a room with her grandmother, who sells falafel from their street-level window, and shares a common bathroom with other tenants. Since a corrupt water department means there’s no running water, she lugs heavy tanks from a fountain first thing every morning. The narrow, picturesque streets where the girl’s husband Aly mans a repair shop are also colorfully atmospheric. Though Nawara and Aly have been hitched for years, they are still waiting for a place of their own to consummate the marriage — and that looks farther off than ever… But our sunny heroine seems impervious to sadness or doubt. Never without a kind smile on her face, she hops from bus to minivan on her way to work in a gated community with swimming pools and golf courses in a green, outlying area of the city. The wealthy household belongs to Ossama (Mahmoud Hemeda), a distinguished former minister and parliament member who has employed Nawara since her mother brought her to work as a child. All around them, rich families like theirs are fleeing the country, taking their wealth with them. They leave the girl and an old caretaker in charge of their empty manse, with strict orders to tell no one they have gone…” –Deborah Young, Hollywood Reporter 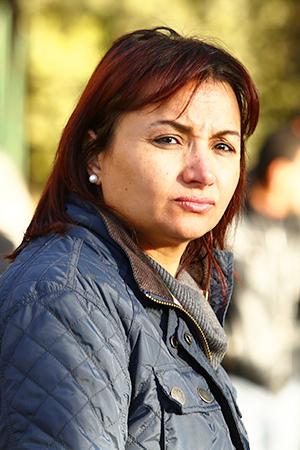 Hala Khalil, screenwriter, director and producer, graduated from Egyptian Cinema Institute in 1992. Her first short THE KITE (1997) and her first feature film BEST OF TIMES (2004) won numerous prizes and screened at international festivals.