A blind old man lives in solitary retirement, studying shells on a remote island in Okinawa. One day an estranged painter comes to his island. She is mysteriously cured of her rare disease by the sting of a poisonous shellfish. Hearing the news, a powerful local man from a nearby island demands that the old man apply the same treatment to his young girl, a shaman. She too is quickly revived from her coma. Rumors spread. The outside world descends upon the island in search of a miracle cure, seeing the old man as a saint. The desires and corruption of the mundane world shatter the old man's connection to the quiet beauty of nature. When his own son dies of shellfish poison, the old man gives himself up to the sea in hallucinatory reverie. Expecting death, he is saved by the young girl. 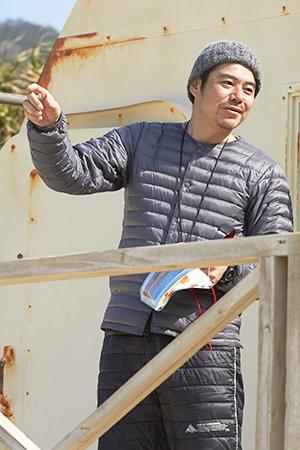 Yoshifumi Tsubota was born in Kanagawa, Japan in 1975. His father was a manga artist and illustrator. His experimental film BIG SPECTACLE, shot while studying at Tama Art University, received the Grand Prix at the Image Forum Festival 2000. His first narrative feature film, MIYOKO, about the life of pioneering manga artist Shinichi Abe, premiered at Rotterdam 2010. Tsubota is a production designer and director of commercials and music videos. He also writes novels.