OLEG AND THE RARE ARTS
Filmfest 2016

An enigmatic old man – dressed like a beatnik – walks through the Hermitage in silence, with a leisurely pace. He approaches the camera and closes his eyes. He seems moved by the ecstasy of beauty in the art around him. He talks about how he came to the museum despite the snow, describing this feat in detail. Oleg's presence is all poetry and music. Reality recedes. Rarely do we find ourselves faced with such a complex person, capable of disarming us of all our prejudices. His chameleon personality is at once symptom and antidote to these times. The cure against social conventions, the monolithic construction of the artist and the man. But Oleg Nikolaevich did not agree to make this film to throw us into the vortex of uncertainty. On the contrary, he wants to reconcile us with the world. He does it through the arts – his arts. The unsuspected beauty of a careless stroke or the clash of two dissonant notes in a melody. 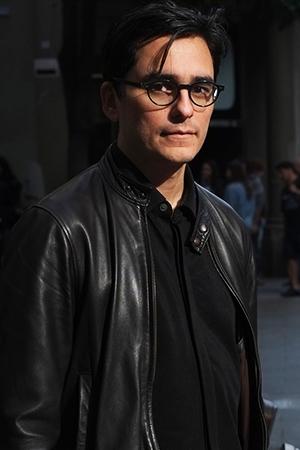 Andrés Duque was born in Venezuela. He is best known for IVAN Z, a portrait of cult filmmaker Iván Zulueta, which screened at festivals around the world and was nominated for a Goya. His debut long feature COLOR RUNAWAY DOG premiered at Rotterdam and won the audience award at the Punto de Vista festival. He was invited to the Flaherty Film Seminar in New York City in 2012. DRESS REHEARSAL FOR UTOPIA won the Barcelona city prize 2013.