Stacy Peralta and George Powell founded skate company Powell Peralta 1976. To publicize the brand, they formed a team of young skaters who would go on to revolutionize the sport: Tony Hawk, Rodney Mullen, Steve Caballero, Lance Mountain, Tommy Guerrero and Mike McGill. Stacy commented that he never wanted to call them a "team," a label that invited all kinds of jock baggage. Craig shrugged and simply said, "Bones Brigade." At the time, skating needed all the help it could get. The 1970s "fad" that swept the country after the invention of the urethane wheel had deflated embarrassingly by 1981. Remaining participants' social status ranked below the chess club. Powell Peralta averaged an anemic 500 monthly board sales and Tony Hawk once received a royalty check for 85¢. To increase brand awareness and grow skateboarding, Stacy produced and created a new Bones Brigade video every year, showcasing his crew's varied personalities and invented maneuvers. The videos routinely featured riders crawling out of sewers, skating abandoned pools and back alleys, bombing desolate hills—essentially shredded an apocalyptic world hidden to most non-skaters. 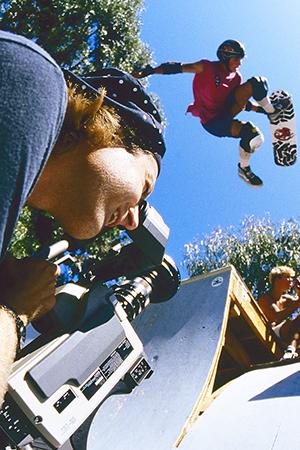 Stacy Peralta was born in 1957 and grew up in Venice, CA. He belonged to the legendary Zephyr skateboard team portrayed in Catherine Hardwicke‘s LORDS OF DOGTOWN (2005) as well as Peralta‘s DOGTOWN AND Z-BOYS (2001). He started directing videos for his skate brand in the 1980s, including feature film THE SEARCH FOR ANIMAL CHIN (1987), and went on to shoot other documentaries like RIDING GIANTS (2004) on big-wave surfing and CRIPS AND BLOODS: MADE IN AMERICA (2008) on the L.A. gang wars.
Close