No one could know that Loïe Fuller (singer-actress Soko), a young woman who grew up on a farm in Illinois, could become one of the biggest stars of the Belle Epoque in Europe – even dancing in the Paris Opera. Under yards of silk, her arms lengthened by poles, she invented her body anew on stage every evening, enchanting the audience with her groundbreaking snake dance. She took the capital by storm and became an icon for a whole generation. Admirers like Toulouse-Lautrec, the Lumières, Rodin worshipped her. Her back suffered, the stagelights burned her eyes, but Loïe didn’t give up. But then she met Isadora Duncan (Lily-Rose Depp, daughter of Johnny Depp) – an encounter that would spell doom for one of the legends of the 20th Century. An astonishing story, a unique biography of a woman far ahead of her time. 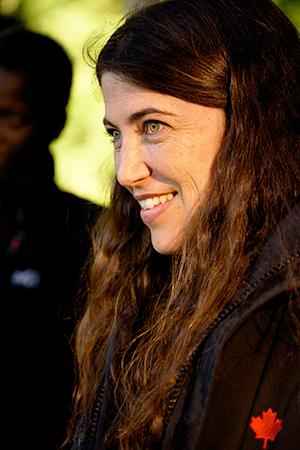 French director, photographer and designer Stéphanie Di Giusto studied at design academy Penninghen in Paris, shooting several music videos for artists like Brigitte Fontaine or Jarvis Cocker. She shot short films with actress Lou Doillon for the collection of fashion designer Vanessa Bruno, which already prefigured the musicality and fascination of physical motion of THE DANCER..