I STILL HIDE TO SMOKE
Filmfest 2017

Based on her hit play, director Rayhana tells a story of the life and oppression of Algerian women – whether in the name of religion, or by their own husbands, fathers or brothers. At the hamam, one of the few places they can meet without watching eyes and scolding tongues, nine women of different ages and backgrounds meet to share their stories: About screaming kids, pregnant virgins, attacks, forced marriages, pubic shaving and the Koran. 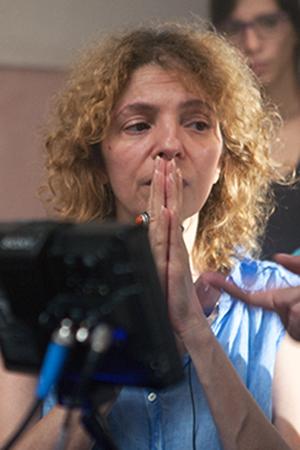 Rayhana was born in Bab El Oued, a traditionally working-class neighborhood of Algiers. She left Algeria several years ago and now lives and works in France. After studying at the Algerian National Institute for Fine Arts, then at the Algerian National Institute for Dramatic and Choreographic Arts, Rayhana joined the Béjaïa national theater company, first as an actress, then as a writer and director. She appeared in numerous films and television dramas before moving on to direct the plays she wrote. She has received numerous awards at various Algerian festivals, including Best Actress (Batna Festival), Best Play (Béjaïa Festival), Best Actress (Annaba Festival), and Special Jury Prize (Carthage Festival, Tunisia). I STILL HIDE TO SMOKE is her first play written in French. In January 2011, she published her autobiography LE PRIX DE LA LIBERTÉ (“The Price of Freedom”).