American Valhalla is the story of an unexpected musical collaboration between two mavericks of American rock: Joshua Homme, the frontman of Queens of the Stone Age and Iggy Pop, the Godfather of Punk. The film follows the recording of Iggy Pop's highest-ever charting album, “Post Pop Depression”, also featuring Matt Helders (drummer, Arctic Monkeys) and Dean Fertita (guitar, Queens of the Stone Age), and the explosive tour that leads to a crowning performance at London's Royal Albert Hall. With stunning cinematography and intimate access, American Valhalla reveals the growth of an intense bond between the musicians who have taken to heart the mantra: "you risk nothing you gain nothing." 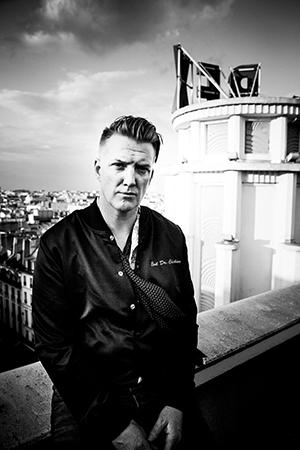 Born in 1967 in Munich, Germany, Andreas Neumann (first photo) forged an opening in advertising and by the early 90s had produced and directed hundreds of international commercials. Music videos provided creative solace. By the late 90s, Andreas, by now known as a boundary pusher, moved to London. His self-imposed challenge: to innovate visual formats and platforms for global brands that drew inspiration from the arts and the entertainment world. After Saatchi & Saatchi came calling, Andreas set up the agency's branded content division and turned heads worldwide by producing the first ever 360-degree dome film for Volkswagen. In 2008, Andreas swapped agency life for a move to California where he started to focus on his true passion, photography. His first published photographic book, “A Tribute to Lucha”, has won multiple design awards. A sequel, interpreted through documentary and moving image, is in pre-production and due to shoot in the summer of 2017. Through a shared passion for los luchadores, Andreas started to creatively collaborate with Queens of the Stone Age lead singer and producer, Joshua Homme. The collaboration led to Andreas shooting all the key photography for Homme's Grammy-nominated album with Iggy Pop, Post Pop Depression. Andreas's relationship with Homme flourished and after partnering with writer-producer, Joss Crowley, a documentary film - AMERICAN VALHALLA - was born. Sharing the responsibility, the film marks the directorial debut for both Andreas and Homme.

Joshua Homme  (second photo) was born in Palm Desert, CA in 1973. He played in multiple bands, including Kyuss (guitar) and Eagles of Death Metal (drums) before becoming producer and lead singer of The Queens of the Stone Age. AMERICAN VALHALLA is his first film as co-director.