TRAITORS - LIES ARE THE ONLY WAY OUT
Filmfest 2017

The Baltic Coast, 1988. The East German regime is rejecting glasnost and perestroika, and the Stasi secret police are as busy as ever, meticulously gathering information on all the country's citizens. Police inspector Martin Franzen so far remains faithful to the system. He watches as the body of a woman, Johanna, is pulled ashore from the Baltic Sea. Apparently, she was shot while trying to escape to the West. When an important witness dies, allegedly a suicide, the Stasi takes over the case. But Martin continues to investigate on his own. A mysterious letter leads Martin to East Berlin and to Nina, a Western woman who fascinates Martin... 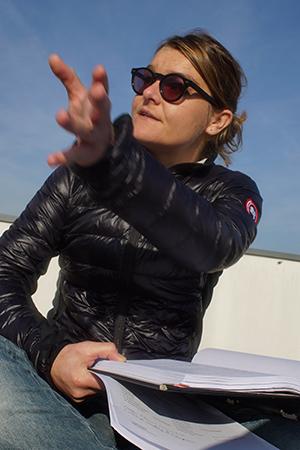 Franziska Meletzky was born in Leipzig, East Germany in 1973. She majored in German, English literature, and communications in Leipzig and Manchester, where she also worked as a waitress for legendary football club ManU. She studied directing at HFF Konrad Wolf in Potsdam-Babelsberg from 1997 to 2004, also directing for the stage, before concentrating on TV and cinema. She directed for the series TATORT (SCENE OF THE CRIME), STROMBERG and DR. PSYCHO, which was nominated for the German TV Prize 2008. She won a Bavarian Film Prize 2016 for VORWÄRTS IMMER! (FORWARD FOREVER!). Her TV movie NUR EINE HANDVOLL LEBEN (JUST A HANDFUL OF LIFE) was nominated for the Grimme Prize 2017.
Close