A THOUGHT OF ECSTASY
Filmfest 2017

August 2019. Frank recognizes his own story of twenty years ago in a recently published book. He remembers Marie, with whom he had a relationship before she moved to the United States and disappeared from his life. Frank sets out in search of her and finds himself in a USA petrified by a heat wave and lost in suspicion and political paranoia. He heads into the desert in pursuit of Marie. Inspired by George Bataille and Jean Baudrillard, director RP Kahl sends a European on a Southwest US desert acid trip, in a blindingly bright world of seduction and thanatos. As much as desire can create a new reality, hallucination can alter the world. And there's a fine line between kissing and cannibalism, on this hottest day ever, August 13, 2019. 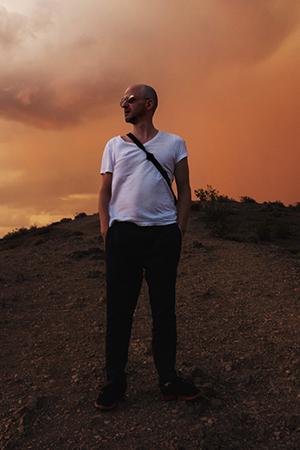