Hans calls his girlfriend Heinz, which tells you everything you need to know about their relationship. They're a typical couple who're stuck in a rut after eight years. Hans works at a copy shop and Heinz is an actress relegated to voicing a cartoon stoplight. On their anniversary, they go to the movies. It's a romance. But the spark on screen just doesn't strike them. When Hans gives Heinz's ex her phone number instead of putting up a fight over her, Heinz' alarm bells go off: How can this be love? They decided to make a list of everything than makes up a real love: Romance, desire, passion, jealousy, drama – deep feelings, in other words. Hans and Heinz methodically start checking off their list and realize: Real life is nothing like the movies. 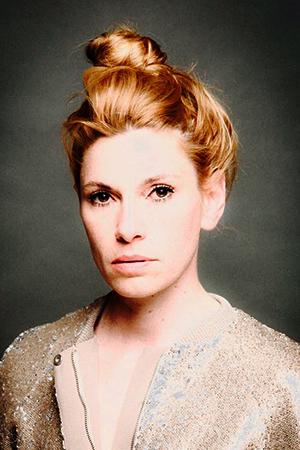 Laura Lackmann was born in Berlin in 1979. After majoring in art history, she AD'd for directors including Istvan Szabo and Jean Jaques Annaud. She attended New York Film Academy and dffb Berlin, making short films for arte, RBB and 3sat. In 2011, she began adapting Sarah Kuttner's bestselling novel MÄNGELEXEMPLAR for Boje Buck Filmproduktion, which she directed for UFA. It was released successfully in theaters 2016 and won a German Acting Prize for Best Actress (Claudia Eisinger) and German Film prize for Best Supporting Actress (Laura Tonke). She worked in the writer's room on Matthias Glasner's six-part miniseries BLOCHIN, and published a novel "Die Punkte nach dem Schlussstrich" with Ullstein/List. FILM WITHOUT TITLE is her second feature, which she also wrote.