By accident Karl Schmidt runs into his old buddies in Hamburg in the mid-90s. While Karl had a nervous breakdown on the day the Berlin Wall fell and wound up in an asylum, his old buds have become stars in the budding new Techno scene. With their hit label, they want to put on a Magical Mystery Tour of Germany, to combine the 1960s psychedelic spirit with modern 1990s rave flavor. The only hitch: Someone has to stay sober and straight to drive the tour bus. The perfect job for Karl Schmidt, who's ready to get out of his dreary halfway house anyway. A madcap road trip though the drug-fueled 90s German techno scene begins... The all-star adaptation of the cult novel by "Element of Crime" singer Sven Regener (MR. LEHMANN). 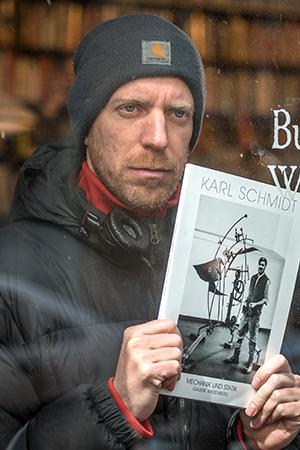 Arne Feldhusen was born in Rendsburg in 1971, working as an assistant editor and AD in the early 1990s and as music adviser for commercials, TV series, movies and docs. He directed doc STRASSENKINDER IN DEUTSCHLAND in 1999, and short THERAPY 2001 before directing hit skit series LADYKRACHER, sitcom STROMBERG (Germany's THE OFFICE) and CRIME SCENE CLEANER, all three of which were nominated for a Grimme Prize, STROMBERG and CRIME SCENE CLEANER winning in 2006, 2012 and 2013. STROMBERG - THE FILM was his theatrical debut 2014, winning the Bavarian Film Prize. Feldhusen teaches at Hamburg Media School