Asunción, Paraguay, 1790: Don Diego de Zama, born in South America and a representative of the Spanish crown, is waiting for a letter from the king that will confirm his transfer to a lonely outpost in Lerma, Argentina. Empathetically, the film looks at the monotonous life of a man faithful to the monarchy and in so doing exposes the unquestioned status and racism of the white colonial masters. Years pass, but the letter never comes. When Zama realizes this, he joins a horde of soldiers in pursuit of a dangerous gang of bandits. Martel's intoxicating episodic film is based on a novel by Antonio di Benedetto.

The screening of ZAMA on July, 3 at Gloria Palast will be shown during the HOMMAGE: LUCRECIA MARTEL. 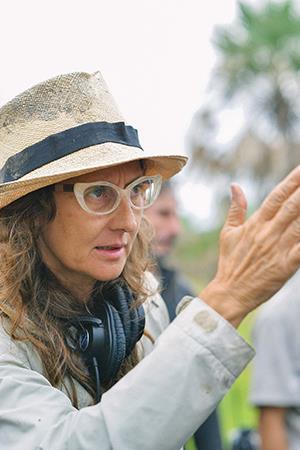 Lucrecia Martel was born in Salta, northern Argentina, in 1966. As a teenager, she often made home movies of her large family. In 1986, Martel moved to Buenos Aires in order to study journalism and later film at the Avellaneda Experimental (AVEX) and the Escuela Nacional de Experimentación y Realización Cinematográfica (ENERC). Following a number of short films, including REY MUERTO (1995), which received awards at numerous international festivals, she began to make documentaries for television. For LA CIÉNAGA (2001), she received the Sundance Filmmakers' Award for her screenplay as well as the Alfred Bauer Award for best debut film at the Berlinale in 2001. Her works also include LA NIÑA SANTA (2004), LA MUJER SIN CABEZA (2008), and ZAMA (2017), all of which she not only directed but also wrote the screenplay for. Her films have been shown at festivals in Cannes, Berlin, Venice, Toronto, New York, Rotterdam, and at Sundance. Film festivals as well as such institutions as Harvard University, UCLA Berkeley, London's Tate Museum, and the Lincoln Center in New York have shown retrospectives of her work. Martel is one of the most important female filmmakers in Latin America.