Terry Gilliam's first film as director, an honor he shares with Terry Jones, is one of the best-known films to feature Britain's Monty Python comedy troupe. In the days of Arthur, king of the Britons, coconut shells make the sound of hooves, Frenchmen hurl insults, the Knights of Ni stand in the way, and only the Holy Hand Grenade of Antioch can stop a killer rabbit. When it's all over — spoiler alert! — the police show up. We're not in Hollywood (yet), after all. Supposedly all that was about the Holy Grail, but any child knows that it isn't real. 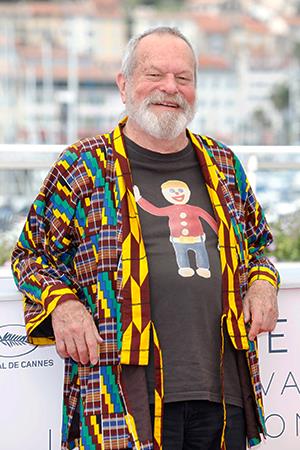 Terrence Vance Gilliam (second) was born in Minneapolis in 1940. After studying political science at Occidental College in Los Angeles, he achieved fame as co-founder of the comedic troupe Monty Python, for which he made bizarre animated sketches. Since 1973, he has been married to make-up artist Margaret Weston. His first live-action film was MONTY PYTHON AND THE HOLY GRAIL (1975), which he co-directed with Terry Jones, followed by JABBERWOCKY (1977) and TIME BANDITS (1981). His BRAZIL (1985) was a kaleidoscopic dystopia; TWELVE MONKEYS (1995) and THE ZERO THEOREM (2013), which were shown at FILMFEST MÜNCHEN, gave an even bleaker impression of the future. Gilliam is one of the world's best-known experts in anti-realistic cinema. He has adopted British citizenship.

Terry Jones was born on the west coast of Wales and studied in Oxford, where he and Michael Palin performed as part of the Oxford Revue comedy troupe. Jones wrote for numerous television shows, of which the most famous by far was MONTY PYTHON'S FLYING CIRCUS (1969–1974). MONTY PYTHON AND THE HOLY GRAIL (1975) was but one of several Monty Python films, including THE LIFE OF BRIAN (1979) and THE MEANING OF LIFE (1983). Jones's most recent work for cinema was ABSOLUTELY ANYTHING (2015), starring Simon Pegg and Kate Beckinsale.