An ex-bodybuilding champion turned personal trainer is secretly excited when he's able to train a young man for the championships. An overweight secretary at a beauty clinic who lacks confidence in her physical appearance uses her sexy voice to create a persona for seducing men she feels she could never have. A dispirited religious singer tries his luck at becoming a wedding singer to increase the chances of finding the love of his life. This is the bittersweet tale of three disillusioned middle-aged characters yearning for love in a city that does not embrace them. 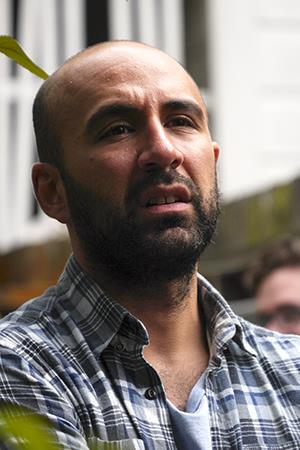 Born in Tehran, Iran, in 1981, Ali Jaberansari moved to Vancouver, Canada, as a teenager. After studying computer science, he attended Abbas Kiarostami's filmmaking workshops in Tehran and decided to pursue his passion for making films. Jaberansari was accepted to the London Film School, where he wrote, directed, and edited several short film projects. His graduation project was the 27-minute film AMAN (2011). His first full-length feature, BARG RIZAN, followed two years later. TEHRAN: CITY OF LOVE (2018) is his most recent work.