STARS ABOVE US
Filmfest 2019

Forced into homelessness, Melli, a single mother, takes her son Ben to a forest. There they build a makeshift camp, set back from the paths so that no one can find them. They think this solution is only temporary. Melli firmly believes their lives will improve soon, a feeling that is strengthened when she is employed as a trainee flight attendant. Unlike Melli, Ben actually enjoys the exciting camp trip. Life under difficult conditions further strengthens the bond between mother and son. Still, nobody must know about their homelessness, for Melli fears the authorities might take Ben away from her. Melli makes an enormous effort every day to fight her way out of this desperate situation. But her search for an apartment brings only humiliation, and when her struggle begins to seem futile, with added pressure coming from the youth welfare office and her employer, she is completely overwhelmed. She can no longer stop what she had tried to prevent under all circumstances. For the good of her child, she has to make the most difficult decision of her life. STARS ABOVE US is a dramatic tour de force in a world divided between rich and poor. 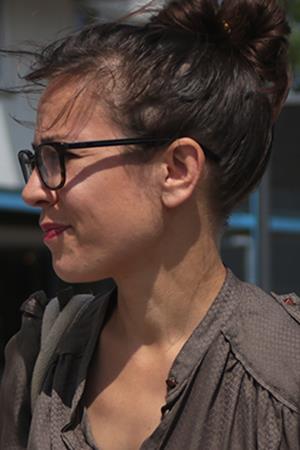 Christina Ebelt was born in 1979. After spending a year in New Zealand, she began studying scriptwriting and directing at Vancouver Film School in Canada. Back in Germany, she worked as an assistant director on Dominik Graf's HOTTE IM PARADIES (2002) and assisted producer/director Romuald Karmakar in the postproduction of his film DIE NACHT SINGT IHRE LIEDER (2004). Ebelt went on to study film at the Academy of Media Arts in Cologne. Together with Jan Bonny, she co-wrote the screenplay to the film GEGENÜBER (2007). Her short films include DER DAUERLÄUFER (2008) and WANNA BE (2009). Ebelt has also been a freelance author since 2009.