This is a stereoscopic essay film that examines the question of how to go on when everything has changed. A young man leaves his apartment in an old high-rise and wanders through deserted landscapes. Something is waiting for him out there, but what drives him forward is his desire to leave everything, including himself, behind. A narrator recounts fragments and experiences of someone's everyday life following a catastrophe. They bear no resemblance to the journey of the young man, but cannot be cleanly separated from it either. Stories start out as banal episodes about grocery shopping or commuting to work, but reveal various strategies for engaging with a profound crisis of identity. The 3-D images are both an artistic and a narrative choice: they serve as a window into his thoughts and attempts to develop a new sense of normalcy. 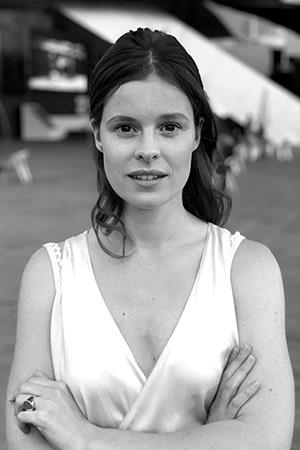 Born in 1989, Luzie Loose lives and works as a director and scriptwriter in Berlin. She studied communications at Universität der Künste in Berlin. She has shot experimental shorts, worked as an assistant director in theater, and worked for several prestigious German TV and film productions. Her work in film has enabled her to travel widely and work in such cities as Paris, Istanbul, Tokyo, and Berlin. In 2011 she began studying commercial and narrative directing at the Filmakademie Baden-Württemberg. Spending a semester at the prestigious La Fémis film school in Paris on a scholarship, she created the film NOUVEAU MONDE. SCHWIMMEN (2017) was her first full-length feature. The film won gold at the Hofer Filmtage for best directing debut, with a laudatio by Edgar Reitz. A NEW NORMAL is her first collaboration with filmmaker Paul Nungesser.