On a pleasant Saturday afternoon, six terrorists raid a café in downtown Dhaka, Bangladesh. The attackers divide the patrons by religion and kill the foreigners first. The few surviving hostages, all of them Muslims, attempt to maintain their humanity in spite of the situation. Basing their story on the attack on the Café Holey Artisan Bakery in Dhaka on July 1, 2016, director and scriptwriter Mostofa Sarwar Farocki examines how and why the attack took place and explores the contradictions inherent in the ideologies and religions involved. This film was shot in a single take. 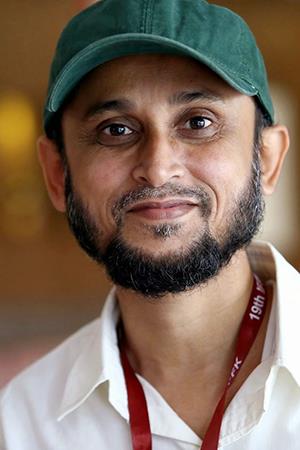 Mostofa Sarwar Farooki was born in greater Dhaka, Bangladesh, in 1973. As a director, producer, and scriptwriter, he is considered an important representative of a new wave of South Asian filmmaking. His first full-length feature was BACHELOR (2004). His subsequent works, THIRD PERSON SINGULAR NUMBER (2009), TELEVISION (2012), and DOOB: NO BED OF ROSES (2017), shown at festivals around the world, received numerous national and international awards. Farooki is the founder of Chabial, a club for young filmmakers in Bangladesh. He has been on various international panels of judges, for example at film festivals in Busan, London, and Singapore. SATURDAY AFTERNOON (2019) is the first film in a trilogy about identity. Farooki has already filmed the second installment, NO LAND'S MAN (also 2019). He plans for part three to be about the Rohingya people, mainly Sunni Muslims from Myanmar, who fled their home country to settle in Bangladesh.