WE WOULD BE DIFFERENT
Filmfest 2019

At age 15, Rupert Seidlein was an eyewitness as his parents and his best friend were shot and killed by two police officers. The officers, however, were acquitted of wrongdoing. Thirty years later, Rupert and his wife Anja return to the place where he grew up. Rupert seems to have found closure regarding that fateful night, appears buoyant, and even offers now-retired police sergeant Horn a toast to reconciliation. A short time later, however, Horn drowns in the Rhine River. Anja suspects that this is no coincidence, but the local police end their investigation rather abruptly. Only Commissioner Wackwitz believes that Horn was murdered and refuses to drop the matter. Anja comes to realize that her husband has not overcome his pain, grief, and anger at all. She seeks to protect him from Wackwitz's encroaching investigation, but Rupert simply cannot find peace. 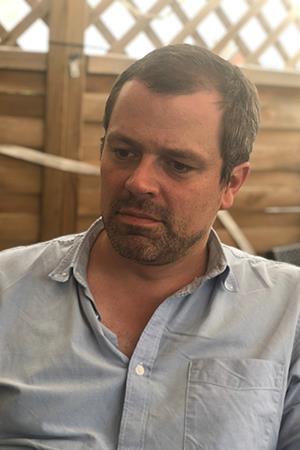 Jan Bonny was born in Düsseldorf in 1979. From 2001 to 2006, he attended the Kunsthochschule für Medien in Cologne. His family drama COUNTERPARTS (2007) premiered at the Directors' Fortnight in Cannes, his 2018 film GERMANY: A WINTER'S TALE in competition in Locarno. Awards and nominations for his work in film and television have been presented at FILMFEST MÜNCHEN, the Grimme Awards, the European Film Awards, and the Kurzfilmtage Oberhausen, including for a 2013 episode of POLIZEIRUF 110 and the TV movie ÜBER BARBAROSSAPLATZ (2016). Repeated collaboration with artist Alex Wissel on experimental films such as SINGLE (2014) and RHEINGOLD (2017, with Volksbühne Berlin); screenings at the Haus der Kunst München, Kestner Gesellschaft, Kunstsammlung NRW, mumok Wien, and elsewhere.
Close