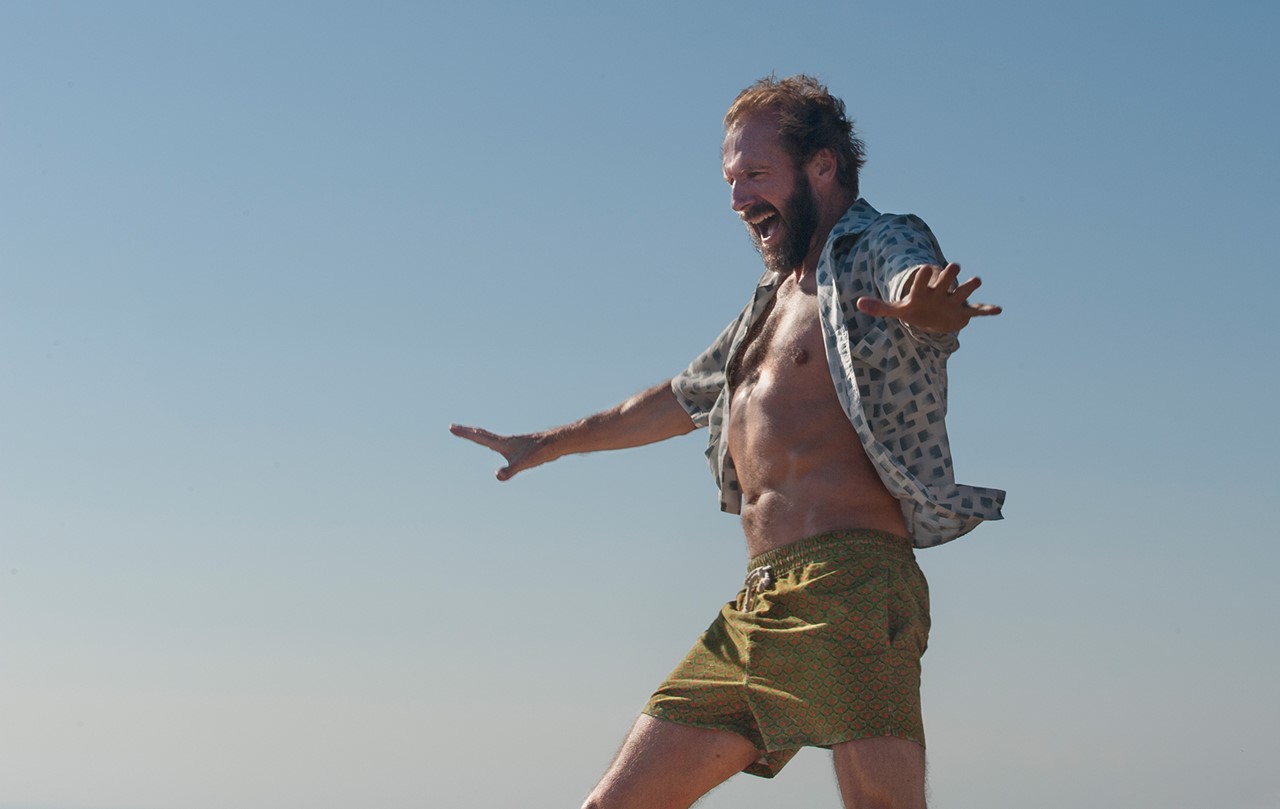 What must it be like to be desired by a whole crowd of people? Rock star Marianne Lane, played by Tilda Swinton, knows this feeling all too well when she hears the screaming fans who've filled a stadium to see her in the spotlight. Unfortunately, her strained vocal cords require an operation. Her longtime lover, Paul, will see to her recovery on the Italian island of Pantelleria. Giving in too far to the desires of others means risking one's own well-being. Later in the film, a car hangs off a cliff; the driver lost control of the wheel while receiving a blow job. This man is played by Ralph Fiennes. He's named Harry, and he and his daughter disturb Marianne and Paul's piece and quiet when he moves into their villa. The title A BIGGER SPLASH is a reference to a painting made by David Hockney in 1967 on which a diving board, a pool, and a splash in the pool are seen without the cause being revealed.
The title also has a lot to do with Harry. Fiennes portrays him as a volatile showman, loud, obnoxious and highly entertaining. When he's not talking about sex, Harry is coming on to his ex-lover Marianne, who for her part has started to take an interest in Paul. Matthias Schoenaerts plays the alternative to Fiennes' Harry: younger, more muscular, quieter, a depressed cameraman who's already gone through treatment for alcoholism and an attempted suicide. Director Luca Guadagnino, who would later tell a similarly seductive story of desire and love between two people of different ages in CALL ME BY YOUR NAME, though without borrowing from film noir, has directed a ménage à quatre full of tension, in the manner of Jacques Deray's THE SWIMMING POOL (1968). The fourth person in this constellation is Harry's own daughter. Harry is quite physical with her, but vehemently denies any accusation of incestuous lust.
A gecko disturbs the foursome. Snakes approach the villa, but are easily gotten rid of. Nature is, in the end, harmless, but the nature of man is that much more dangerous: narcissists everywhere. Where is the empathy? Refugees have made it to the island, while others have drowned. The drama of their lives plays out parallel to the drama of these relationships. At some point, Harry will risk becoming a victim of his own impulses. The show that Ralph Fiennes puts on will burn itself into your memory. 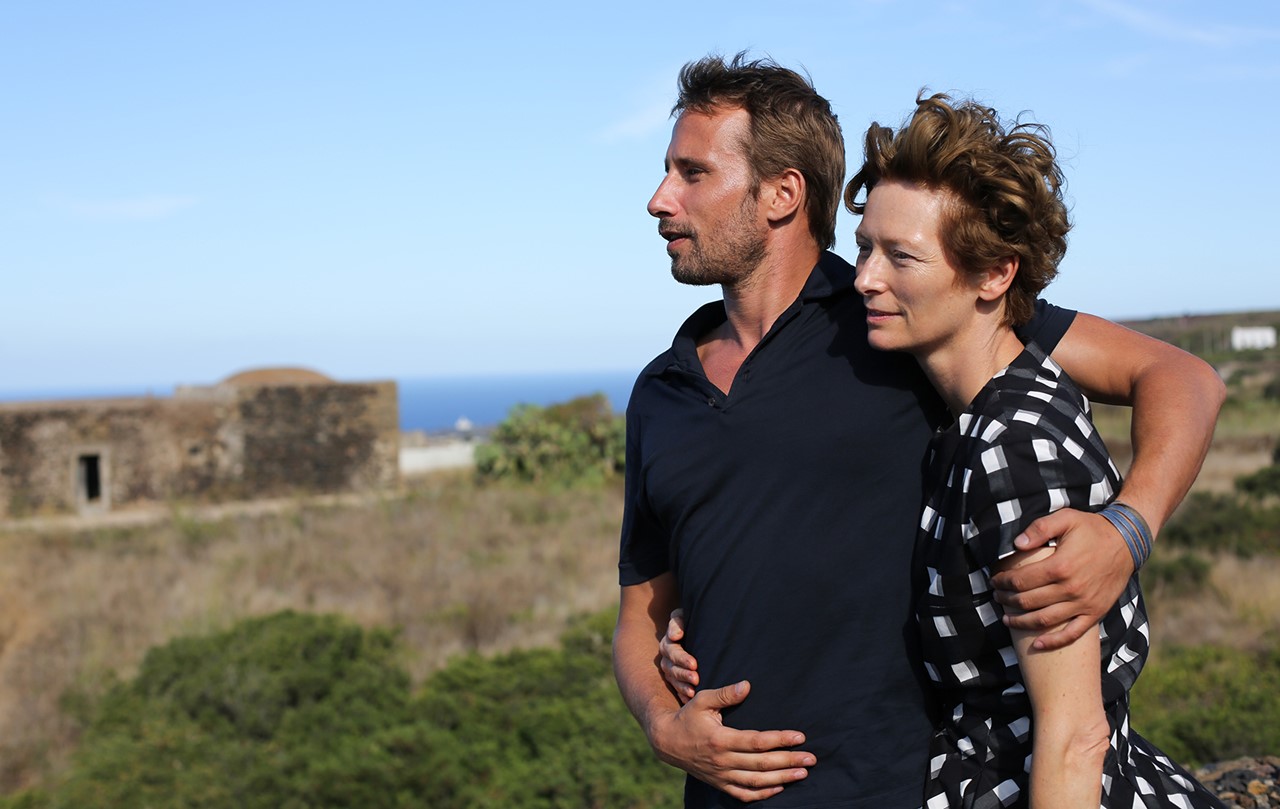 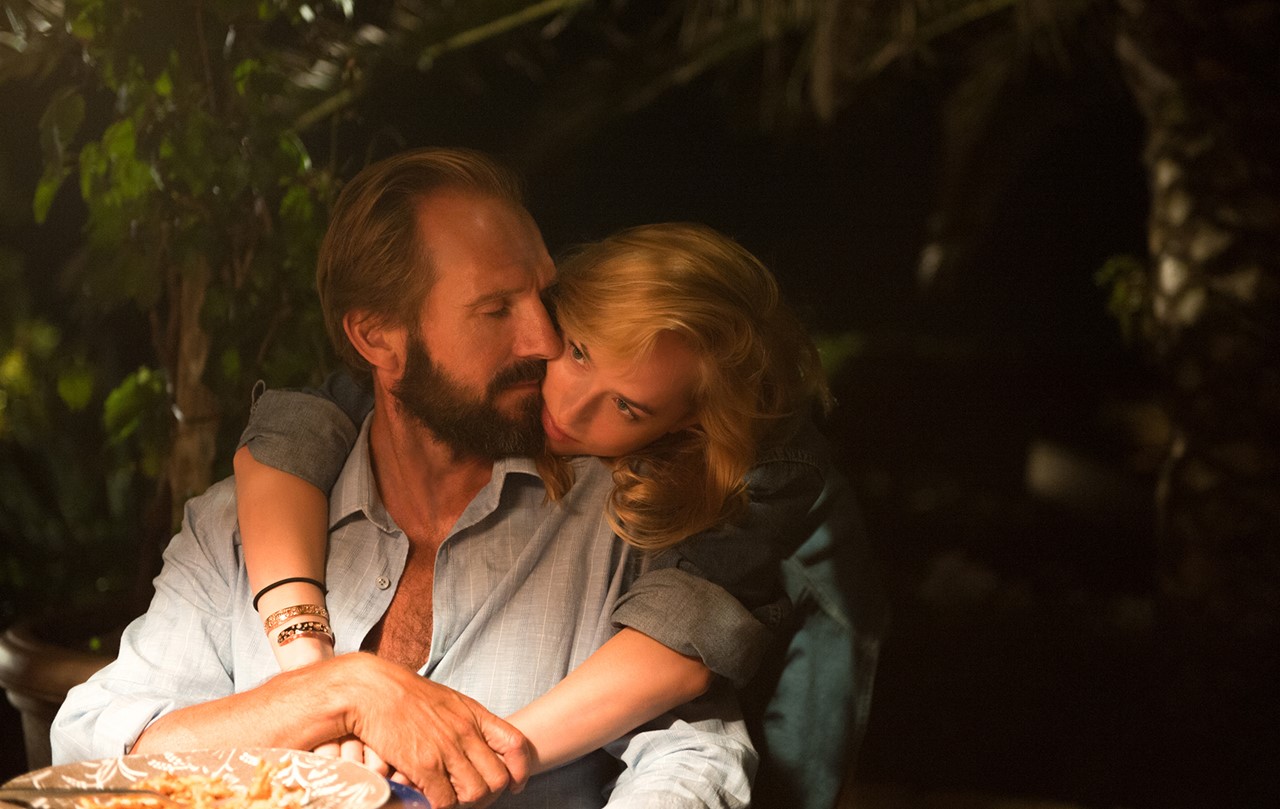 Luca Guadagnino was born in Palermo, Italy, in 1971. In Rome, he earned his PhD at La Spienza University with a thesis about director Jonathan Demme (THE SILENCE OF THE LAMBS). Guadagnino's first feature film was THE PROTAGONIST, which celebrated its premiere in Venice in 1999. After several documentaries, including the short film TILDA SWINTON: THE LOVE FACTORY (2002) by and with Tilda Swinton, his breakthrough came in 2005 with the film MELISSA P., an adaptation of Melissa Panarello's erotic novel of the same title. Guadagnino collaborated with Tilda Swinton again in 2009, giving her the leading role in I AM LOVE, his first internationally successful film, which brought in a number of nominations for awards, including for a Golden Globe. In 2015, he remade Jacques Deray's classic THE SWIMMING POOL (1969) as A BIGGER SPLASH, again with Tilda Swinton. In 2017, his film CALL ME BY YOUR NAME, based on a novel by André Aciman, earned four Oscar nominations. Only four months after production ended, Guadagnino began shooting SUSPIRIA, a remake of Dario Argento's 1977 horror movie. This film had its world premiere in competition at the Venice Film Festival.